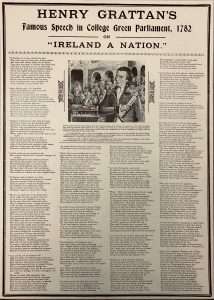 GRATTAN, Henry. Famous Speech in College Green Parliament 1782, on ‘Ireland a Nation’. Grattan’s original speech paraphrased in blank verse, circa 350 lines set in four columns with a portrait of Grattan in the Old Irish Parliament, the whole within black borders, image circa 46.5 x 34.5cms, verso blank, no publisher named, circa 1918, strongly mounted on backing board behind double green window mount and clear mylar, ready for framing. The poem is unsigned, but similar to items which have been ascribed to John Francis (Sean) McEntee, a Belfast man (later a Fianna Fail Minister) who took part in the Easter Rising, and published a volume of poems around this time. The attribution is unproven, but is plausible in our view. Fine. Very scarce.