ONE OF THE SUPREME TEXTS OF THE RENAISSANCE 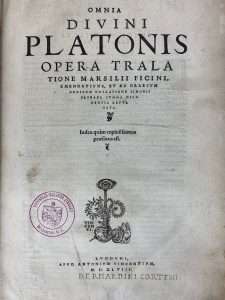 A highly important edition with the translation by Marsilio Ficino. Replete with large historiated and figurative capital letters throughout.

Preceded with the dedication of the great curator S. Grynaeus, the proem dedication to Lorenzo de Medici and the important Life of Plato written by Ficino the original translator of the manuscripts into Latin; index at the end; 36 of the Platonic dialogues and works (the Dialogues, 10 books of the Republic, 12 books of the Laws and 12 of the Letters), edited and with the commentary of Marsilio Ficino. A highly important edition of the Opera of Plato with the translation of Marsilio Ficino, the first and most important of the modern epoch, in itself one of the primary movers of the humanism of the Renaissance.

Marsilio Ficino (1433-1499) Italian scholar and Catholic priest was one of the most influential humanist philosophers of the early Italian Renaissance. He was an astrologer, a reviver of Neoplatonism in touch with the major academics of his day and the first translator of Plato's complete extant works into Latin. His Florentine Academy, an attempt to revive Plato's Academy, influenced the direction and tenor of the Italian Renaissance and the development of European philosophy.

Ficino was born at Figline Valdarno. His father Diotifeci d'Agnolo was a physician under the patronage of Cosimo de' Medici, who took the young man into his household and became the lifelong patron of Marsilio, who was made tutor to his grandson, Lorenzo de' Medici. Giovanni Pico della Mirandola, the Italian humanist philosopher and scholar was another of his students.

When Cosimo decided to refound Plato's Academy at Florence he chose Ficino as its head. In 1462, Cosimo supplied Ficino with Greek manuscripts of Plato's work, whereupon Ficino started translating the entire corpus to Latin (draft translation of the dialogues finished 1468-9; published 1484). Ficino also produced a translation of a collection of Hellenistic Greek documents found by Leonardo da Pistoia later called Hermetica, and the writings of many of the Neoplatonists, including Porphyry, Iamblichus and Plotinus.

A physician and a vegetarian, Ficino became a priest in 1473. The following year Ficino completed his treatise on the immortality of the soul, 'Theologia Platonica de immortalitate animae' (Platonic Theology). In the rush of enthusiasm for every rediscovery from Antiquity, he exhibited a great interest in the arts of astrology, which landed him in trouble with the Roman Catholic Church. In 1489 he was accused of magic before Pope Innocent VIII and needed strong defense to preserve him from the condemnation of heresy.
Writing in 1492 Ficino proclaimed: ""This century, like a golden age, has restored to light the liberal arts, which were almost extinct: grammar, poetry, rhetoric, painting, sculpture, architecture, music ... this century appears to have perfected astrology.""

Ficino introduced the term and concept of ""platonic love"" in the West. It first appeared in a letter to Alamanno Donati in 1476, but was later fully developed all along his work, mainly his famous De amore. After his death his biographers had a difficult task trying to refute those who spoke of his homosexual tendencies. But his sincere and deep faith, and membership of the clergy, put him beyond the reach of gossip, and while praising love for the same sex, he also condemned sodomy in the Convivium. His Latin translations of Plato's texts put into practice the theories of anti-homosexuality in his Convivium.
Marsilio Ficino was ever able to place women on an equal level with men in the cosmological hierarchy. Ficino died on 1 October 1499 at Careggi. In 1521 his memory was honoured with a bust sculpted by Andrea Ferrucci, which is located in the south side of the nave in the Cathedral of Santa Maria del Fiore." PLATO.