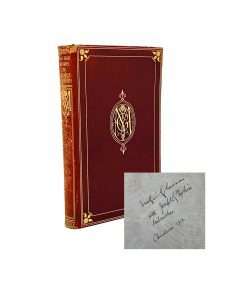 Christmas 1912.’ Repair to top of spine. Top edge gilt. A fine copy with a great association. Evelyn Gleeson founded The Dun Emer Guild, an Irish Arts and Crafts textile studio in 1902, initially in partnership with Elizabeth and Lily Yeats as Dun Emer Industries and Press.
The Dun Emer Guild was the textile producing arm of Dun Emer Industries, which was founded in 1902 by Evelyn Gleeson, Elizabeth and her sister Lily Yeats with funding from Augustine Henry and a sum of money Gleeson inherited. The company was run out of Gleeson’s home, Dun Emer in Dundrum. The house and administration of the company was overseen by Gleeson’s widowed sister, Constance MacCormack. MacCormack and her three children, Kitty, Grace, and Edward lived with Gleeson after the death of MacCormack’s husband around 1902.

The Dun Emer studio and press were named after Emer, daughter of Forgall Monach, wife of the hero Cúchulainn in the Ulster Cycle of Irish mythology, a figure famous for her artistic skills. The Guild’s workshops were located on the top floor of Dun Emer. Their products regularly won prizes at exhibitions run by the Irish Industries Association and the Royal Dublin Society. The Guild exhibited at the 1904 St Louis World’s Fair, in the United States as part of the Irish Industrial Exhibition. The Guild became noted for their hand woven carpets and tapestries which incorporated Celtic knotwork and interlace.

By 1908, Gleeson’s and the Yeats sisters’ relationship had become strained, with the Yeats sisters leaving Dun Emer with their private press, which they renamed the Cuala Press. Gleeson continued on as the Dun Emer Guild designing and creating textiles. By this time her two nieces, Kitty and Grace, along with Henry’s niece May Kerley, were all employed in the Guild as well as bookbinder Norah Fitzpatrick, and Máire Nic Shiubhlaigh.