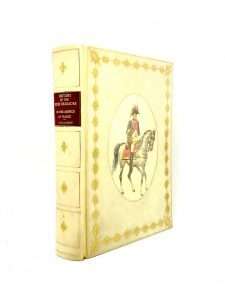 O'CALLAGHAN, John Cornelius. History of the Irish Brigades in the Service of France, from the Revolution in Great Britain and Ireland under James II to the Revolution in France under Louis XVI. With an introduction by Colonel Patrick J. Hally. Facsimile reprint of the First (Glasgow) edition of 1870. With portraits and illustrations. Shannon, I.U.P., 1969. [190 x 250mm]. pp. xiii, 649. Bound in full vellum by Paddy Kavanagh at Museum Bookbinders, Dublin, with their printed ticket on the front pastedown. Covers framed by a single gilt fillet and a continuous classical roll enclosing in the centrean oval hand-painted illustration of an Irish Officer on horseback in the uniform of the Irish Brigade; flat spine in five giltruledpanels, title in gilt on maroon morocco letterpiecein the second, the remainder tooled in gilt with a fleur-de-lys in the centre. Red and white endbands, grey endpapers. Top edge gilt. Signed by the binder, Paddy Kavanagh. A fine and unique binding in clam-shellbox.

Thousands of Irishmen left Ireland following the collapse of the Jacobite armies, 1689-91. These Irishmen and their descendants fought with distinction on the battle fieldsof Europe and their prowess caused King George II to observe on the eve of the battle of Dettingen "God curse the laws that made these men my enemies". Prime historical and genealogical reference work on these 'Wild Geese' families who formed the Irish Brigades that served the French crown for most of the eighteenth century. Colonel P.J. Halley in his introduction states: "no modern historian has attempted such a complete history of the Irish Brigades in the service of France" and O'Callaghan's is still "the standard work". Possibly unique, Paddy Kavanagh states that there wasonly one maybe two copies of this special binding bound at their premises. See illustration on lower cover.