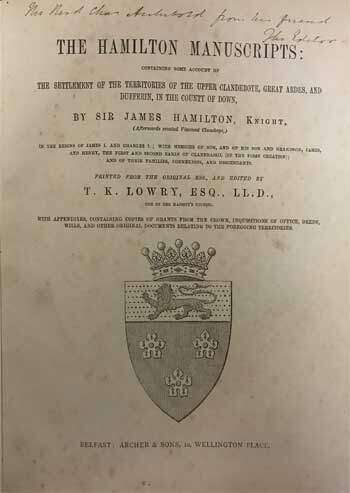 HAMILTON, Sir James. The Hamilton Manuscripts: Containing some account of The Settlement of the Territories of the Upper Clandeboye, Great Ardes, and Dufferin, in the County of Down in the Reign of James I and Charles I; with Memoirs of him, and of his son and grandson James, and Henry, the First and Second Earls of Clanbrasil (of the First Creation); and other families, connexions and descendants. Printed from the original mss. and edited by T.K. Lowry. With appendices, containing copies of grants from the Crown, inquisitions, deeds, wills, genealogies, etc. Belfast: Archer, n.d. (1867). Sm. 4to. pp. viii, 166, cvi, 4. Presentation copy from the editor, inscribed on title-page.