CROKER, Thomas Crofton. A Walk from London to Fulham. 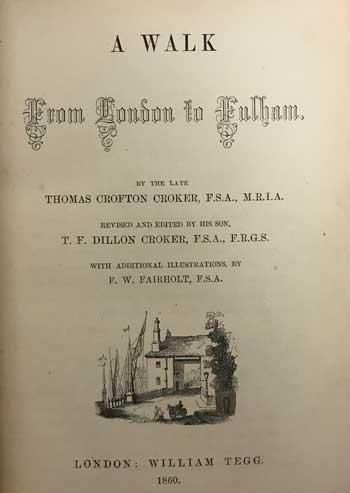 "Thomas Crofton Croker (1798-1854) a native of Cork, was one of the most celebrated of Irish antiquaries, folklorists and collectors of ancient Irish airs. He had but little education and at sixteen was apprenticed to a firm of Cork Quaker merchants. Croker spent a number of years in London where he was clerk to the Admiralty, where a distant relative, John Wilson Croker, was his superior. He is best known for his antiquarian researches and from an early age he showed a great interest in literature and antiquities. Between 1812 and 1815 he rambled about the south of Ireland collecting the songs, legends, and traditions of the peasantry. He gave some ancient airs to Thomas Moore, who afterwards invited him to England where he further developed in his literary career, as well as gaining employment with the Admiralty.