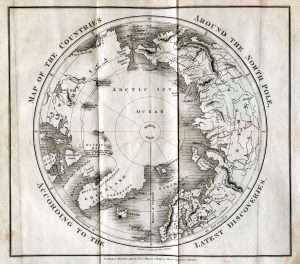 BARRINGTON, Daines. & BEAUFOY, Colonel. The Possibility of Approaching the North Pole Asserted. A New Edition, with an Appendix, containing Papers on the Same Subject, and on a North West Passage. Folding map as frontispiece. London: Printed for Charles Wood for T. and J. Allman, 1818. Medium octavo. pp. xxiv, [1], 258, [4 (Advertisements)]. With a woodcut vignette to title. Modern green cloth, title in gilt on red morocco label on spine. Original Circulating label laid on upper cover. Stamp of Westley & Tyrrell, Dublin on titlepage. A very good copy. This volume contains papers relating to an expedition under the command of Captain Phipps commissioned by the Government of the day. These papers were originally published in pamphlet form. Colonel Beaufoy, who published these papers, also added his own appendix on the same subject to this volume. Daines Barrington, by profession a lawyer, was always fascinated with the Arctic regions. A scarce title. Sabin 3629.