O’HART, John. Irish Pedigrees; or The Origin and Stem of The Irish Nation

O'HART, John. Irish Pedigrees; or The Origin and Stem of The Irish Nation. Two volumes. 127 New York: Murphy & McCarthy, 1923. Limited American Edition. Quarto. pp. (1) xxxii, 912, (2) xxiv, 948, 22. Brown blind-stamped cloth, armorial shield in gilt on upper cover, title and volume number in gilt panels on spine. All edges light brown. A fine set. John O'Hart (1824-1902), genealogist, was a native of Crossmolina, Co. Mayo. Although it was his wish to join the priesthood, family circumstances prevented this. He joined the Royal Irish Constabulary, but left after two years to take up a teaching post with the Commissioners of National Education. This is the best edition of O'Hart's magnum opus on Irish families. In the preface to this work we are told that: all the Genealogies contained in the third edition of 'Irish Pedigrees', as well as those given in 'Irish Landed Gentry when Cromwell came to Ireland' are included as well as descriptions of the armorial bearings of the families traced. Included in this volume are the genealogies of many of the Huguenot families, the Protestant refugees who were driven from their homes in France during the reign of Louis XIV. There is also an excellent appendix containing lists of Irishmen who have served in the Spanish army, Austria, Irish Legion, Irish Brigade, Spanish Netherlands, with various lists of Irish and Anglo Irish families and descendants of the 'Wild Geese'. 1923 OHART, John. 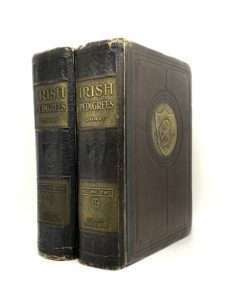