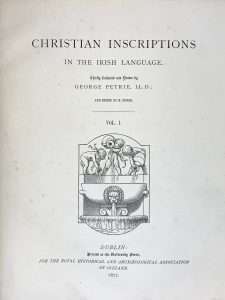 PETRIE, George. Christian Inscriptions in the Irish Language. Chiefly collected and drawn by G. Petrie, and edited by Margaret Stokes. With lithographed and photographic plates in each volume, and engraved illustrations on text pages throughout. Two volumes. 140 Dublin: Printed at the University Press, for the Royal Historical and Archaeological Association of Ireland, 1872/1878. Two volumes in one. Modern quarter morocco on cloth boards. A very good copy.

George Petrie (1789-1866), antiquary, was born in Dublin, the son of a portrait painter. Educated at Samuel Whyte's School in Grafton Street, and at the Art School of the Dublin Society, where he excelled and obtained a silver medal for figure drawing in 1805. When about nineteen he began to make excursions through the country in search of the picturesque, and to examine and take careful notes and sketches of antiquities. His remarks upon these were characterised by great acuteness of observation. For the present work he was awarded the Royal Irish Academy's Gold Medal.

Volume one is devoted to the important early medieval monastery at Clonmacnoise. It opens with an essay on the historical background, and contains drawings of over 170 inscriptions connected with the monastery. Each is accompanied by notes on its subject, date, script, decoration and linguistic features. The second volume gathers inscriptions from other monastic sites across Ireland. Each inscription is illustrated by a drawing, and accompanied by notes on its subject, date, script, decoration and linguistic features.
In the preface he states: ""The work contains not only the essay on the round towers, very much enlarged, but also distinct essays on our ancient stone churches and other ecclesiastical buildings of contemporaneous age with the round towers"". Petrie's conclusions regarding the Christian origin of these towers are now accepted by all leading Irish scholars and antiquarians. His sole interest lay in the preservation of Ireland's past culture, and he was devoid of any personal ambitions. His illustrations constitute a pictorial record of our ancient monuments, drawn with a meticulous accuracy, that has never been surpassed." 1872 PETRIE, George.