WELD, Isaac. Statistical Survey of the County of Roscommon, drawn under the directions of the Royal Dublin Society 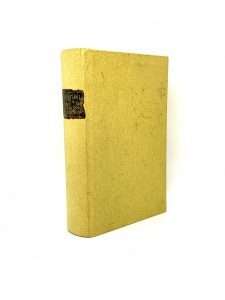 Dublin and educated at Samuel Whyte’s School, Grafton
Street and in Norfolk. His name stems from his great
grandfather’s close friendship with Sir Isaac Newton, and as
such both his grandfather and father were also named Isaac.
His father was a close friend of Charles James Fox. His sister
married George Ensor. In 1795 he sailed for Philadelphia and
spent two years travelling in America and Canada, and met
George Washington. In 1799 he published ‘Travels Through
the States of North America and the Provinces of Upper and
Lower Canada’ which went to three editions and was
translated into French, German and Dutch. Weld visited
Killarney and in 1812 published Illustrations of the Scenery of
Killarney and the Surrounding Country illustrated with his
own drawings. A member of the Royal Dublin Society from
1800, he undertook the ‘Statistical Survey of Roscommon’. It
was one of the best county surveys carried out for the RDS.
Sir Isaac Weld was honorary secretary to the Society for over
twenty years, and after his death its members erected a
monument to him in Mount Jerome Cemetery.
This survey is an in-depth study of all aspects of the county -
population, economy, geography, topography and society of
County Roscommon in the early nineteenth century. The author discusses agriculture - crops, farms,
farming methods, tenure and rents, wages; living conditions, transport, religion, giving us a picture of
the county a decade before the Great Irish Famine 1845-1852