AS TRUE TO THE SADDEST AND HEAVIEST TRUTHS OF IRISH LIFE 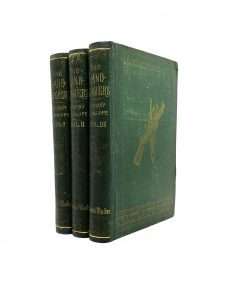 COPAC with 6 locations only. Loeber 138. Sadleir 68.
The purpose of Trollope’s first visit to Ireland in 1843 was to investigate irregularities in the Post Office at Drumsna, County Leitrim, then managed by William Allen. After a weary journey he arrived late in the village and stayed in a small public-house. His bedroom was approached by a flight of steps, half stairs, half ladder, not far from perpendicular. The room had little in the way of furnishings, except two beds close together, a table, chair and basin-stand. He retired to bed early, could not secure his room door, after some time he fell into an uneasy restless sort of sleep, and was suddenly awoken by the tread of footsteps approaching his bed. Frightened and half awake he leapt from his bed, caught the intruder by the throat, in the ensuing struggle, the door opened and his antagonist stumbled and fell down the stairs. Aroused by this noise, the late night drinkers rushed into the room and struck a light. That very moment, Trollope heard the landlady cry out: “ Oh, boys, that murderin’ villain upstairs has killed his raverance! ... We’ll soon settle the damned Sassenach “. But for the intervention of the half- strangled priest, it would have been curtains for Trollope. When peace was established apologies were made all around. Trollope found out in actual fact that he had assaulted the local parish priest, who was out on a late call and had decided to stay at the inn that night. Fortunately he was none the worse for his encounter and afterwards he and Trollope became very good friends. Trollope featured this kindly gentleman in this novel.
‘The Landleaguers’ was set in County Galway where an English Protestant family bought a property at the height of the agrarian troubles. The most interesting aspect of this novel is the trials of those boycotted and the incidents of the period, as well as the background on Irish social and rural life, as seen by a sympathetic Englishman, although anti-nationalist. An admirable contemporary article on his novels is found in the ‘Dublin Review’ and deserves quoting: “This Englishman keenly observant, painstaking, absolutely sincere and unprejudiced, with a lynx-like clearness of vision, and a power of literal reproduction of which his clerical and domestic novels, remarkably as they exhibit it, do not furnish such striking examples, writes a story as true to the saddest and heaviest truths of Irish life, as racy as the soil, as rich as the peculiar humour, the moral features, the social oddities, the subtle individuality of the far west of Ireland as George Eliot’s novels are true to that of English life”.