WELD, Isaac. Illustrations of the Scenery of Killarney and the Surrounding Country 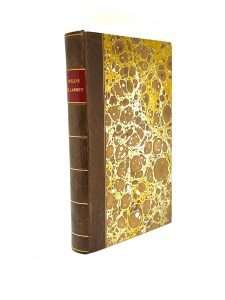 WELD, Isaac. Illustrations of the Scenery of Killarney and the Surrounding Country. With frontispiece, map, engraved title, one engraved folding plate and eighteen full page engravings. 142 A FINE COPY London: Longman, Hurst, 1812. Second edition. Royal octavo. pp. vii, [1], 293, [1], 18 (plates), 2 (maps). Modern quarter calf on marbled boards, title in gilt on red morocco label on spine. A fine untrimmed copy. "Isaac Weld (1774-1856), author, was born in Dublin and educated at Samuel Whyte's School, Grafton Street and in Norfolk. In 1795 he sailed for Philadelphia and spent two years travelling in America and Canada, and met George Washington. In 1799 he published 'Travels Through the States of North America and the Provinces of Upper and Lower Canada' which went to three editions and was translated into French, German and Dutch.
Weld visited Killarney and its lakes, and the present work is the result of that visit, illustrated with his own drawings. A member of the Royal Dublin Society from 1800, he undertook their 'Statistical Survey of Roscommon'. Sir Isaac Weld was honorary secretary to the Society for over twenty years, and after his death its members erected a monument to him in Mount Jerome Cemetery.
A beautiful series of views of one of Ireland's most scenic regions. Includes views of the lakes, the surrounding mountains as well as picturesque ruins and castles. Engraved titlepage, printed by James Ballantyne & Co., depicts the Chapel of Inishfallen." 1812 WELD, Isaac.