O’CONNOR, Rory. Letters Written Before Their Martyrdom on the Feast of the Immaculate Conception, 1922 by Rory O’Connor and Joe McKelvey

O’CONNOR, Rory. Letters Written Before Their Martyrdom on the Feast of the Immaculate Conception, 1922 by Rory O’Connor and Joe McKelvey [to his brother and his mother, respectively]. With: Letters Written Before their Martyrdom .. by Liam Mellowes & Richard Barrett [to his mother and ‘to my fellow prisoners’ respectively].
Fine and moving letters, written after the four leaders were woken in Mountjoy Prison at 3 a.m. with the news that they were to be shot at dawn, in ‘reprisal’ for the killing of Cumann na nGael TD Sean Hales. Two of the letters make a particular point of asking that there should be no thought of revenge or further reprisal. The four had been in prison since the surrender at the Four Courts, and were in no way involved in the shooting of Hales. There was no possible legal justification for their execution, the only justification being that the state was under threat and ‘necessity knows no law’.
Two single pages, each 29 x 24cms. approx, with initials and borders printed in red, very good clean copies, each stoutly mounted on board behind cream window mount and mylar cover. Both sheets are scarce, and for some reason the two are rarely found together. 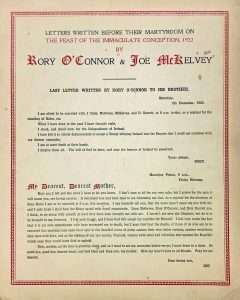 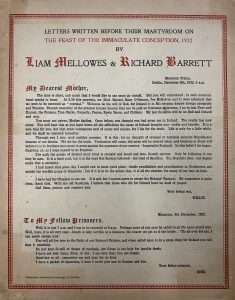