"IN MEMORY OF THOSE GOLDEN DAYS IN GALWAY ..."

Oifig Díolta Foilseacháin Rialtais, 1935. First edition. Black cloth gilt. Frontispiece of a stage setting, evidently by MacLiammhóir. With a superb inscription on front free endpaper to [Prof.] Liam Ó Briain, ‘Duit-se, a Liaim, a chara ionmhuin, -- i gcuimhne ar na laethanna órdha úd i nGaillimh, Samhradh 1928 -- agus mo ghrádh leis, Micheál 1936.’ [‘For you, Liam, close friend -- in memory of those golden days in Galway, Summer of 1928, and with my love.’]. With a fine signature. A very good clean copy.

Back "Liam Ó Briain [1888-1974] was a very distinguished scholar and patriot. Born in Dublin, he won the first National University travelling studentship in 1911, and studied in Germany and Paris. In 1914 he was appointed lecturer in French at UCD. He joined the Irish Volunteers, took part in the Howth gun-running, and in the Rising he fought in St Stephen’s Green. He was interned in Frongoch with Michael Collins and others until the general release [see his memoir Cuimhní Cinn].
In 1917 he was appointed Professor of Romance Languages at UCG. He was a Sinn Fein candidate in the 1918 general election, and in 1920 was a judge in the Sinn Fein courts - an illegal activity under British rule, for which he was jailed for a year. He took the Treaty side in 1922, and retired from active politics soon afterwards. Returning to university in Galway, he was one of the founders of the Irish-language theatre Taibhdhearc na Gaillimhe, which opened in 1928 with Micheál Mac Liammhóir’s retelling of the ‘Diarmuid agus Gráinne’ legend from Irish mythology. In this opening presentation, Ó Briain himself took the part of the aged warrior Fionn Mac Cumhaill, while the author Mac Liammhóir was the young champion Diarmuid Ó Duibhne. Gráinne’s part was taken by the Connemara singer Máire ní Sgolaidhe. What a start for a new theatre!
Mac Liammhóir, then at the start of his career, soon moved to Dublin, where he opened the Dublin Gate Theatre with his partner Hilton Edwards and Lord Longford. Ó Briain remained mainly in Galway until he retired from his chair in 1959.
‘Golden days’, indeed. It is impossible to imagine a more appropriate work linking these two distinguished men, who remained life-long friends in spite of their differing outlook on many matters." 1935 MACLIAMMHÓIR, Micheal. 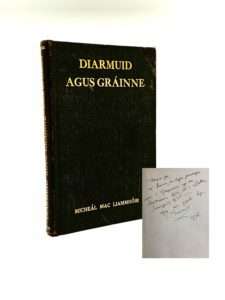