SIGNED LIMITED EDITION OF 250 COPIES ONLY 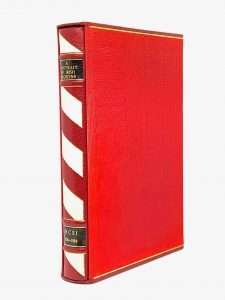 Coat of arms of the Royal College of Surgeons in Ireland in gilt on upper cover; the flean or lancet used by surgeons in blood-letting in gilt on lower cover. Spine embossed with off-white bars on the red morocco background symbolising the barber’s pole, the emblem of the Barber-Surgeons Guild in which surgeons were once incorporated together with barbers. Red and white endbands, water-silk endpapers. Limited edition of 250 copies only. Limitation leaf signed by the President R.C.S.I., Eoin O’Brien, Anne Crookshank, Liam Miller, Joe Kelly, Des Breen and Gordon Wolstenholme. All edges gilt. A fine copy in leather slipcase with water-silk sides.