CAUSSIN, Nicholas. The Holy Court, being a comprehensive system of Moral Maxims [IN A FINE CONTEMPORARY DUBLIN BINDING]

IN A FINE CONTEMPORARY DUBLIN BINDING 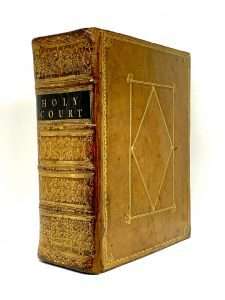 CAUSSIN, Nicholas. The Holy Court, being a comprehensive system of Moral Maxims, Pious Reflections, and Historic Examples: forming in itself a Complete Library of Rational Entertainment, Catholic Devotion, and Christian Knowledge. In five parts. Originally written in French by the learned and pious Nichlaus Caussin, of the Society of Jesus, and translated into English by Sir Thomas Hawkins and others. Amended and corrected from the old edition with the life of the author and an account of his writings purposely compiled for the present publication. Enriched with several superb engravings. Dublin: Printed and Published by John Coyne, No. 74 Cook-Street, 1816. Quarto. pp. [x], 6, [6], 1560, [8 (plates)]. Continuous pagination for the five parts, with separate titles. Bound in a fine contemporary Dublin binding of full calf, covers framed in gilt by double gilt fillets and narrow floral roll and floral tool in corners, enclosing an inner gilt panel with outer gilt fleurons and inner gilt diamond. Spine divided into five panels by four gilt raised bands, title in gilt on black morocco letterpiece in the second, the remainder elaborately tooled in gilt; splash-marbled endpapers; new blue and gold endbands. Spine professionally restored. Mild surface wear. All edges marbled. A superb copy. Extremely rare.

No copy located on COPAC. WorldCat 2.
Nicolas Caussin (1583-1651) was a French Jesuit, a theorist of the passions. His treatise, ‘The Holy Court’ gives a Christianized account of what he calls the four principal passions: Love, Desire, Anger, and Envy, as well as many variants and subgenres of these types. The intent of the work is to instruct the proper means for controlling these passions.

Sir Thomas Hawkins (died c.1640) was an English poet and translator. He was the eldest son of Sir Thomas Hawkins, of Nash Court, Kent, by Anne, daughter and heiress of Cyriac Pettit, of Boughton- under-the-Blean in the same county. John Hawkins M.D., and Henry Hawkins the Jesuit, were his brothers. He succeeded to the family estates on the death of his father, 10 April 1617, and was knighted by James I at Whitehall Palace 4 May 1618.

Like all the members of his family, he was a staunch recusant. On 11 December 1633 an attempt was made under a council-warrant to search his house for Father Symons, a Carmelite friar, and others. Lady Hawkins would not admit the officers without a special warrant, saying that her husband had the great seal of England in his trunk to protect her house, and the matter seems to have dropped there. While this work is outwardly known as a teaching tool, it also includes accounts of historical significance. According to Lowndes, “In this work will be found a life of Mary Queen of Scots.”

Not only does this book discuss the history of English royalty, but Caussin covers the crusades, New Testament history, and early Christianity in the Roman Middle Ages.