YOUNG, Arthur. A Tour in Ireland; with General Observations on the Present State of that Kingdom: made in the years 1776, 1777, and 1778. And brought down to the end of 1779. Engraved frontispiece. 141 London: Printed for T. Cadell, Strand; and J. Dodsley, Pall-Mall, 1780. Quarto. pp. [5], ii-xi, [1], [4 (list of subscribers)], 384, 168, [4 (index and advertisement)]. Recent half brown morocco on marbled boards, spine divided into six panels by five thick gilt bands, title in gilt on green morocco label in the second, the remainder with device in blind. Edge of frontispiece lightly foxed. A very good and attractive copy.

"ESTC T80849. Includes list of subscribers.
Arthur Young toured Ireland in 1776, 1777 and 1778, observing all classes, from titled lords to casual labourers, and all areas, from the semi-industrial North to the dairy country of Wexford and Waterford. As an agriculturalist of European repute, he had no difficulty in securing introductions to the most prominent members of the Irish aristocracy and gentry, giving him a framework for his astonishingly comprehensive tour of the island.
Unlike most travellers of his time, Young's attitude was that of scientific observer rather than sentimental tourist, and his accounts of Irish life are thus more detailed and more vivid than the descriptions of his contemporaries. He was particularly interested in the conditions of the peasantry, believing with Dr. Johnson that ""a decent provision for the poor is the true test of civilisation"", and condemned the management of the 'lower classes', who ""are much worse treated than the poor in England, are talked to in more opprobrious terms, and otherwise very much oppressed.""
Young's account of urban and rural life, of farming practice, industry, and the political atmosphere of the country remains one of the chief authorities for Irish economic conditions in the late eighteenth century.
This work is the most valuable examination ever undertaken of agricultural and social conditions in Ireland." 1780 YOUNG, Arthur. 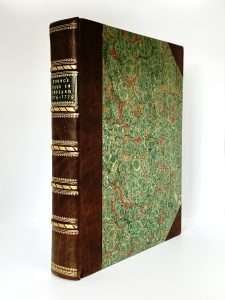