Easter Week 1916. ‘28th April 1916, 9-30 a.m. .. We are busy completing arrangements for the final defence of Headquarters, and are determined to hold it while the buildings last. I desire now, lest I may not have an opportunity later, to pay homage to the gallantry of the soldiers of Irish Freedom, who have, during the past four days, been writing with fire and steel the most glorious chapter in the later history of Ireland. Justice can never be done to their heroism, to their discipline, to their gay and unconquerable spirit, in the midst of peril and death. .. For my part, as to anything I have done in this, I am not afraid to face either the judgement of God, or the judgement of posterity.’ Printed within ornamental borders below an illustration of ‘I.R.A. In Action’ [the supposed scene within the GPO] by A.J.B., Dublin, image circa 40.5 x 25.5cms, on light but good quality paper, verso blank, no printer named. Strongly mounted on backing board behind double green window mount and clear mylar. A fine copy.

There is no doubt of the authenticity of this document, but until recently the text was known only from its republication in an American work, ‘The Irish Rebellion of 1916 and Its Martyrs. Erin’s Tragic Easter’, edited by the Irish journalist Maurice Joy. We have not previously seen the present publication, which appears broadly contemporary, and it is certainly very rare. A fine companion piece for anyone owning a Proclamation: the start and the finish of the Rising. 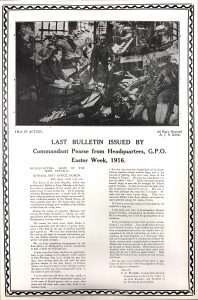